WHY DO MULTI-VARIATE ANALYSIS

We will illustrate multi-variate analysis with the following case study:

To get the spending on milk channel-wise and region-wise, using xtabs function

To get percentage spending

To get %age spending on grocery channel-wise and region-wise, using aggregate function

To get %age spending on frozen channel-wise and region-wise, using tapply function

To get %age spending on detergent_paper channel-wise and region-wise, using dplyr library

Anova can be used to understand, how a continuous variable is dependent on categorical independent variables.

In the following code we are trying to understand if sales of milk is a function of Region and Channel and their interaction.

This shows that expense of milk is dependent on channel

Chisquare Test to understand the association between 2 factor variables

Probability is very high, 11.37%, hence we fail to reject the null hypothesis. Hence, we conclude that there is no association between channel and region.

Multi-Variate analysis has a very wide application in unsupervised learning. Clustering has the maximum applications of multi-variate understanding and visualizations. Many times we prefer to perform clustering before applying the regression algorithms to get more accurate predictions for each cluster.

We will do hierarchical clustering for our case study, using the following steps:

1. Seperating the columns to be analyzed

Let’s get a sample data comprising of all the items whose expenditure is to be analyzed i.e all columns except Channel and Region – like fresh, milk, grocery, frozen etc.

2. Scaling the data, to get all the columns into same scale. This is done using calculation of z-score:

3. Identifying the appropriate number of clusters for k-means clustering

Though 2 clusters / 3 clusters show the maximum variance. In this case-study we are deviding the data into 10 clusters to get more specific results, visualizations and target strategies.

We can also use within-sum-of-squares method to find the number of clusters.

4. Finding the most suitable number of clusters through wss method

We will plot the within-sum-of-squares distance using ggplot library:

We notice that after cluster 10, the wss distance increases drastically. So we can choose 10 clusters.

We will apply kmeans algorithm to divide the data into 10 clusters:

6. Checking the Attributes of k-means Object

We will check the centers and size of the clusters

Getting Cluster-wise summaries through mean function

We observe positive correlation between:

Next we will import the ggplot2 library to do the graphical representations of data data-frame.

Relationship between Milk, Grocery and Fresh across Region across Channel

Relationship between Milk, Grocery and Frozen Products across Region

Relationship between Milk, Grocery and Frozen across Channel

Relationship between Frozen Products, Grocery and Detergents Paper across Region across Channel

Relationship between Milk, Delicassen and Detergents Paper across Region

Relationship between Milk, Grocery and Detergents Paper across Channel

Relationship between Milk, Grocery and Detergents Paper across Region across Channel

Relationship between Milk, Grocery and Detergents Paper across Region across Channel

Based on the above understanding of cluster-wise trends, we can devise cluster-wise, region-wise, channel-wise strategies to improve the sales.

We use dimensionality reduction techniques like PCA to transform larger number of independent variables into a smaller set of variables:

Also, PCA is normally an intermediate step in the data analysis since the new variables created (the predictions) can be used in subsequent analysis such as multivariate regression and cluster analysis.

We will discuss PCA in my further posts. 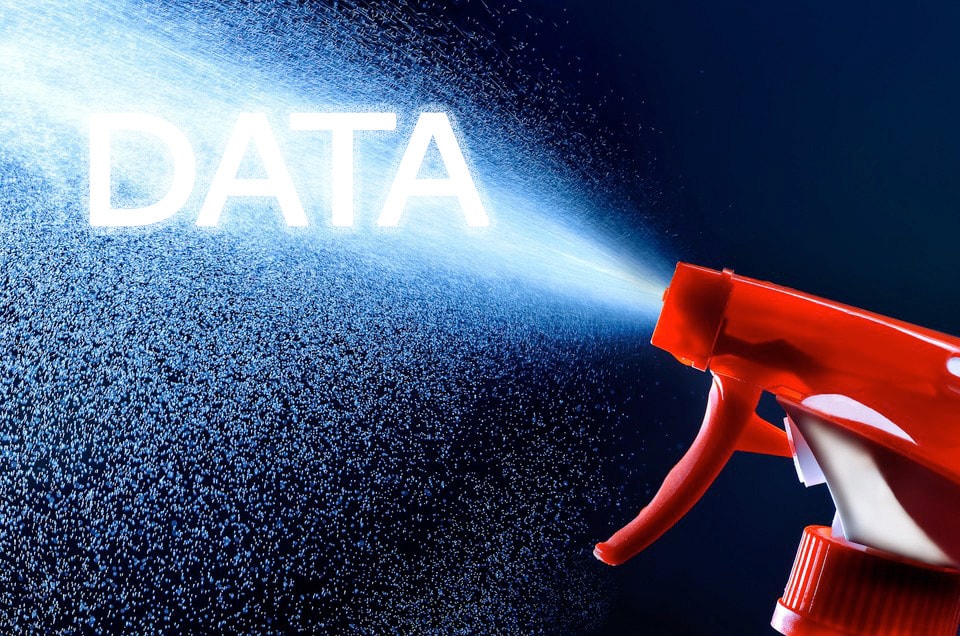 Data Cleaning, categorization and normalization is the most important step towards the data. Data that is captured is generally dirty and is unfit for statistical analysis. It has to be first cleaned, standardized, categorized and normalized, and then explored.

Happy families are all alike; every unhappy family is unhappy in its own way – Leo Tolstoy

Like families, clean datasets are all alike but every messy dataset is unreadable by our modeling algorithms.Clean datasets provide a standardized way to link the structure of a dataset with its semantics.

We will take the following text file with dirty data:

Let us start with tidying the above data. We’ll adopt following steps for the same:

1. Read the unclean data from the text file and analyse the structure, content, and quality of data.

The following functions lets us read the data that is technically correct or close to it:

When the rows in the data file are not uniformly formatted, we can consider reading in the text line-by-line and transforming the data to rectangular text ourself.

The variable txt is a vercot of type “character” having 8 elements, equal to number of lines in our txt file.

2. Delete the irrelevant/duplicate data. This improves data protection, increases the speed of processing and reduces the overall costs.

In our eg., we will delete the comments from the data. Comments are the lines followed by “%” sign using following code.

3. Split lines into seperate fields. This can be done using strsplit function:

Here, txt was a vector of type characters, while, after splitting we have our output stored in the variable “fields” which is of “list” type.

It is a crucial process where the data is defined, formatted, represented and structured in all data layers. Development of schema or attributes is involved in this process.

The goal of this step is to make sure every row has same number of fields, and the fields are in the same order. In read.table command, any fields that are less than the maximum number of fields in a row get appended by NA. One advantage of do-it-yourself approach is that we don’t have to make this assumption. The easiest way to standardize rows is to write a function that takes a single character vector as input, and assigns the values in the right order.

The above function takes each line in the txt as the input (as x). The function returns a vector of class character in a standard order: Name, Birth Year, Death Year, Gender. Where-ever, the field will be missing, NA will be introduced. The grep statement is used to get the location of alphabetical characters in our input variable x. There are 2 kinds of alphabetical characters in our input string, one representing name and other representing sex. Both are accordingly assigned in the out vector at 1st and 4th positions. The year of birth and year of death can be recognized as “less than 1890” or “greater than 1890” respectively.

To retrieve the fields for each row in the example, we need to apply this function to every row of fields.

Our Categorize function here is quite fragile, it crashes for eg. when our input vector contains 3 or more character fields. Only the data analyst should determine how generalized should our categorize function be.

5. Transform to Data to the Frame type

First we will copy the elements of list to a matrix which is then coerced into a data-frame.

Here, we have made a matrix by row. The number of rows in the matrix will be same as number of elements in stdfields. There-after we have converted the matrix in data.frame formats.

It is the systematic process to ensure the data structure is suitable or serves the purpose. Here the undesirable characteristics of the data are eliminated or updated to improve the consistency and the quality. The goal of this process is to reduce redundancy, inaccuracy and to organize the data.

String normalization techniques are aimed at transforming a variety of strings to a smaller set of string values which are more easily processed.

sapply function will return object of type matrix. So we again recovert it into data-frame type

One is using ^ operator. This will find the words in the Gender column which begin with m and f respectively.

So, here there are 2 operations required to convert pqr to qpr

We’ll use adist function in the gender column in the following manner:

We can use which.min() function on each row to get minimum distance from the codes.

Let’s retrieve the classes of each column in data-frame at:

We will convert Birth and Death columns to Numeric data-types using transform function.

The data as represented in dat data frame is clean, standardized, categorized and normalized.

When we talk to data cleaning, we can’t miss cleaning and normalizing the date variable. Date variable mostly is generally keyed in by different people in different formats. So, we always face the problem in standardizing it.

In the following example, we’ll standardize and normalize the date variable:

In the below code, we will make the assumption that month can’t be in the first-2 or last-2 characters. The month in all cases comes in the middle of date and year; or year and date.

Next, we will write a function to find the first-two digits of each date:

Next, we will write a function to find the last-2 digits of each date:

Middle 2 digits can be alphabetic or numeric. We will write the function to find the middle 2 characters. We will adopt following steps to reach the middle characters:

Next we will initialize variables before applying a for-loop to process and segregate the date, month and year for each date field.

Now, for each date field, we will find the first-two numbers, the last-two numbers and the middle characters. Then we’ll apply following rules:

The vector formatted_date contains the date in the correct format.

The datal.frame datf comprises of all the entries segregated as date, month and year.

We note, that date vector now contains all the dates in the standard format. The class of variable date is “date”.