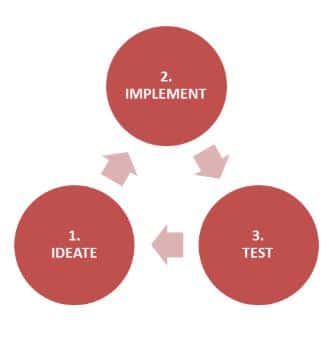 Deep Learning is highly empirical domain which majorly focusses on fine tuning the various parameters. The choice of these parameters defines the accuracy of model. So, it becomes important to choose such parameters wisely. Choosing the parameters based on intuition might not work every time which can degrade the performance of the model drastically. Also, a considerable amount of time and effort will go in vain while selecting the values of parameters based on intuition. So, the methodological approach should be followed to select the optimal values of parameters to maximize the accuracy of the model.

There is an n number of parameters which needs to be fine-tuned. Some of them are:

Before deep diving directly into bias-variance trade off, let us discuss systematic approach to handle the Machine Learning problem.

The very first step to handle the machine learning problem is:

Let’s talk about above mentioned points in detail:

Data set is divided into train set, cross validation set often called as development sets and test set. Generally, ratio of 60-20-20 is followed i.e. 60% of data is used to train the model, 20% data for cross validating the model to fine tune the parameters and 20% data to test the accuracy of model on unbiased data set. One most important thing to keep in mind here is not to follow the general rule blindly. The distribution of data into train set, development set and test set majorly depend on the size of data. For instance, if observations in data set is as high as 1000000. Then 90-5-5 ratio or even 98-1-1 ratio works far better than usual 60-20-20 rule. This is because all deep learning models has hunger for data. Using 60-20-20 distribution in such scenario would waste the large chunk of data which could be utilized for training the model. On the other hand, if size of data set is as small as 10000, 60-20-20 or 80-10-10 will work far better than 90-5-5 because size of data set is small. The key point to notice here is that we need at least 10% of data to fine-tune the parameters of model in this case. If the size of cross validation data set is too small then, it is likely that the model will overfit to cross validation data set and hence will fail to generalize over test data.

Along with the division of data into train/dev/test set, another important parameter to be considered is “Development set or Cross-validation set and test set should come from same distributions.”More importantly, Development set/Cross Validation set and Test set should reflect the real-world data which is expected to be seen by model.There are some applications where Dev sets/Test sets doesn’t come fromsame distributions. In those cases, there are different set of methods for bias variance trade off. However, that topic is out of context for this blog post.

Selecting the correct evaluation metric is one of most important parameters in solving any deep learning problem which majorly depends on type of problem at hand and domain knowledge. The best practice is to select single evaluation metric. This practice can speed up the process of cross validating the model and allows to experiment different approaches for fine tuning the parameters. However, there are certain applications where one evaluation metric is not sufficient to measure the performance of model. In those cases, it is recommended to select one optimizing metric and another satisficing metric. Let’s take the example of speech recognition to understand the concept of optimizing and satisficing metric. In speech recognition model, “accuracy” can be optimizing metric and “time required to train the model can be satisficing metric” can act as satisficing metricthat means goal is to maximize the accuracy while satisfying the condition that time required to train the model must be less than 1min.

Prediction error can be broken down into three categories Bias, Variance and Irreducible error. Let’s talk about Bias and Variance to understand the Bias Variance tradeoff.

Bias in simplest terms can be defined as “Assumptions made on the form of model which makes the learning of the model easier.”Let’s talk about the linear regression model which falls into category of High Bias model.The linear Regression model is a parametric model because shape of model is assumed to be linear irrespective of the distribution of data. Since, the form of model is assumed to be linear, it might happen that model doesn’t fit the data well which results into underfitting. Generally, high bias models are linear/parametric models such as linear regression, linear discriminant analysis, logistic regression.

Variance can be defined as the “amount by which the estimate of target function will change if different training data was used”. Let’s take the instance of decision tree to understand the high variance model. The decision tree with a large number of nodes is likely to overfit the training data because with the increasing number of nodes model is specifically tuned to training data. It makes it difficult for the model to generalize on the other data.High Variance models include non-linear or non-parametric algorithms such as Decision Trees, K- nearest neighbors and Support Vector Machines.

Here’s the basic approach to solve the Machine Learning problem. Let’s understand each of below step in detail. 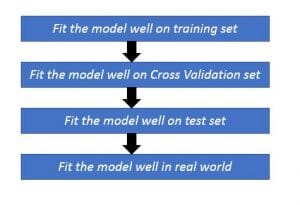 Bayes Optimal Error is defined as the lowest possible error for any classifier which is analogous to irreducible error.  Bayes Optimal Error is generally used as baseline accuracy for the problems where Machine Learning has significantly surpassed the human level performance. Some examples include Online Advertising, recommendation systems, Loan Approval where there is a lot of structured data should be analyzed. In applications, such as speech recognition, computer vision training accuracy is measured with respect to human performance.

Let’s take an example of Speech Recognition model to understand this concept. Training error of model came out to be 15% whereas human error on the same given task is 1%. This means model is not fitting well on training data itself i.e. “High Bias.”  The following ideas should be tried to approach High Bias problem.

Let’s take an instance of another speech recognition model. Training error for that model is 2% and human error is 1%. In this case, our model performance is good as it is nearly equal to human error. Hence, there is no “High Bias” problem. Here, Dev set/Cross Validation error is 10%. Since there is huge difference between training error and dev set error, it can be concluded that Model is suffering from “High Variance” Problem. This means the model is overfitted to training data and is not able to generalize well on the data which it has never seen before. Following ideas can be implemented to handle High Variance problem.

After resolving high bias and high variance problem, the accuracy of model is checked on unbiased data set i.e. test set. If there is significant difference between Development Set error and Test set error then, there might be possibility of overfitting of model on development set. Getting a bigger development set generally works in such cases.

To generalize the conclusion drawn from the blog post, significant difference between human performance/bayes optimal error and training error signifies “High Bias” problem whereas the gap between training error and development set/ cross validation set error signifies “HighVariance” problem. Different methods should be used to deal with High Bias or High Variance problems rather than experimenting based on intuition.