On our path of building an SMS SMAP classifier, we have till now converted our text data into a numeric form with help of a bag of words model. Using TF-IDF approach, we have now numeric vectors that describe our text data.

In this blog, we will be building a classifier that will help us to identify whether an incoming message is a spam or not. We will be using both machine learning and neural network approach to accomplish building classifier. If you are directly jumping to this blog then I will recommend you to go through part 1 and part 2 of building SPAM classifier series. Data used can be found here

Before jumping to machine learning, we need to identify what do we actually wish to do! We need to build a binary classifier which will look at a text message and will tell us whether that message is a spam or not. So we need to pick up those machine learning models which will help us to perform a classification task! Also note that this problem is a case of binary classification problem, as we have only two output classes into which texts will be classified by our model (0 – Message is not a spam, 1- Message is a spam)

We will build 3 machine learning classifiers namely SVM, KNN, and Naive Bayes! We will be implementing each of them one by one and in the end, have a look at the performance of each

A Support Vector Machine (SVM) is a discriminative classifier which separates classes by forming hyperplanes. In other words, given labeled training data (supervised learning), the algorithm outputs an optimal hyperplane which categorizes new examples. In two dimensional space, this hyperplane is a line dividing a plane into two parts wherein each class lay in either side.

Till now, we have trained our model on the training dataset and have evaluated on a test set ( a data which our model has not seen ever). We have also performed a cross-validation over the classifier to make sure over trained model is free from any bias and variance issues!

Our SVM model with the linear kernel on this data will have a mean accuracy of 97.61% with 0.85 standard deviations. Cross-validation is important to tune the parameters of the model. In this case, we will select different kernels available with SVM and find out the best working kernel in terms of accuracy. We have reserved a separate test set to measure how well the tuned model is working on the never seen before data points.

K-Nearest Neighbors (KNN) is one of the simplest algorithms which we use in Machine Learning for regression and classification problem. KNN algorithms use data and classify new data points based on similarity measures (e.g. distance function). Classification is done by a majority vote to its neighbors. The data is assigned to the class which has the most number of nearest neighbors. As you increase the number of nearest neighbors, the value of k, accuracy might increase.

Below is the code snippet for  KNN classifier

Naive Bayes Classifiers rely on the Bayes’ Theorem, which is based on conditional probability or in simple terms, the likelihood that an event (A) will happen given that another event (B) has already happened. Essentially, the theorem allows a hypothesis to be updated each time new evidence is introduced. The equation below expresses Bayes’ Theorem in the language of probability:

Below is the code snippet for multinomial Naive Bayes classifier

Evaluating the performance of our 3 classifiers

SVM, with the highest accuracy (97%), looks like the most promising model which will help us to identify SPAM messages. Anyone can say this by just looking at the accuracy right? But this may not be the actual case. In the case of classification problems, accuracy may not be the only metric you may want to have a look at. Feeling confused? I am sure you will be and allow me to introduce you to our friend Confusion Matrix which will eventually sort all your confusion out 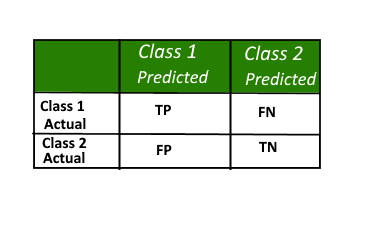 A sample confusion matrix for 2 classes Given below is the confusion matrix of the results which our SVM model has predicted on the test data. Let us find out accuracy, precision and recall in this case.

In Machine Learning, performance measurement is an essential task. So when it comes to a classification problem, we can count on an AUC – ROC Curve. It is one of the most important evaluation metrics for checking any classification model’s performance. It is also written as AUROC (Area Under the Receiver Operating Characteristics)

We plot a ROC curve with TPR against the FPR where TPR is on y-axis and FPR is on the x-axis. 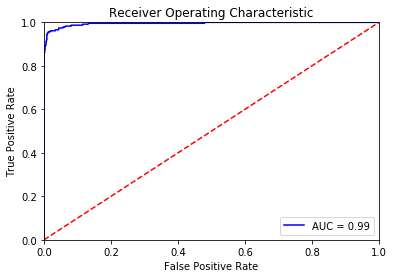 Always remember that the closer AUC (Area under the curve) is to value 1, the better the classification ability of the classifier. Furthermore, let us also have a look at the ROC curve of our KNN and Naive Bayes classifier too! 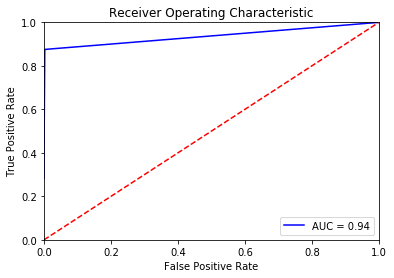 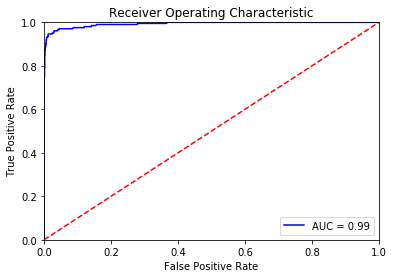 In this series, we looked at understanding NLP from scratch to building our own SPAM classifier over text data. This is an ideal way to start learning NLP as it covers basics of NLP, word embeddings and numeric representations of text data and modeling over those numeric representations. You can also try neural networks for NLP as they are able to achieve good performance! Stay tuned for more on NLP in coming blogs.